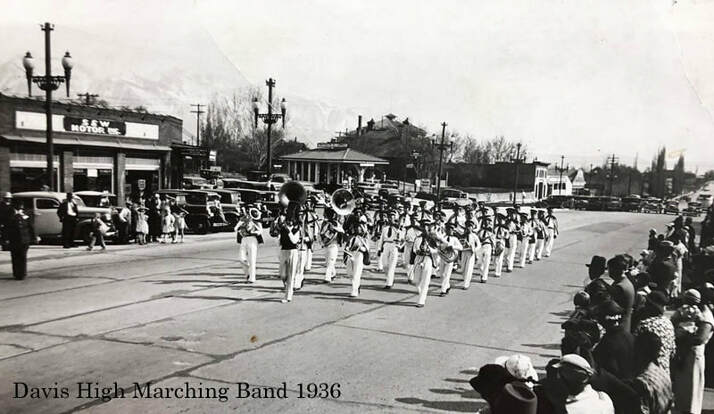 ​Davis High celebrated its Centennial in 2014, but the music programs have not been around quite as long. The 1919-1920 yearbook has a page devoted to the fledgling music program, saying that this was the first time Davis High had music education in the school. The first music teacher was Mrs. Emily Sitzer. She was not a member of the faculty, so we can only assume that she was a volunteer with a musical background. She formed a small choir and an “orchestra” made up of a few wind players and a couple of string instruments. Unfortunately this organization lasted only a year and the school had no music groups in 1920-21.

In 1921 Leander T. Thompson took over the music programs at Davis High. Under his direction the school reinstated the glee club and the “orchestra,” which again was made up mostly of band instruments. Leander was replaced in 1925 by Apollo Hanson, who led for a year before turning over the music program to Hugh W. Dougall in 1926.

In 1930 John L. (Jack) Stacey took the reins of the music programs at Davis High. He continued to work at DHS for 26 years as the orchestra, choir, and school musical/opera director. Under his direction the band grew exponentially. In 1930 they purchased their first set of uniforms and started the marching band. The band finally took on a personality of its own, and in 1936 Floyd Fletcher was chosen to take on the band so that Jack Stacey could focus on the other musical interests of the school.

From 1936 to 1958 the directors were called “advisers” in the yearbooks. Band was taught one period a day, so the directors also taught other content areas to fill out their schedule. Floyd Fletcher was director from 1936 to 1938. He was replaced by Douglas Liston, who was director from 1938 to 1942. Due to the growth of the band, Mr. Liston split the group into “Concert Band” and “Pep Band.” The yearbooks from those years tell us that the concert band members were those who chose to learn the “classical” literature while the pep band was essentially the marching band. From 1942 to 1948 the band was directed by Parley Thorderson. Like some others, Mr. Thorderson continued at Davis as an English teacher for several years after he turned over his responsibility to the band. He was replaced by Hollis Grange, who led the band for eight years. Frank Postma took over the entire music department in 1956, once again consolidating all music under one director. He was at Davis for just two years. Ronald Pexton also worked at Davis for two years, from 1958 to 1960. During his tenure we have the first mention of a field show in the yearbook. It is described as a “halftime show with sets designed by Mr. Pexton and members of the band council.”

During the 1960’s the band program went through several directors and as a result the number of students fluctuated. Frank Parker was the music teacher at Davis from 1960 to 1965, but after his departure Davis went through four directors in four years; Jarvis Palmer (1965-66), Harold Gottfredson (1966-67), Frank Johnston (1967-68), and Mr. Miller (1968-69). By the time the decade ended the band program was small and looking for solid direction. That direction came in the form of Gregg I. Hansen, who took over the band in 1969. During his seven year tenure Mr. Hansen built the band program into one of the finest in the country. The marching band took first at the 1970 University of Utah Marching Band Championship and went on to win four consecutive Davis Cup championships (two under Gregg) when field show competitions were still a new thing in Utah. The symphonic band performed at the 1974 MENC National Convention and the students were recognized by Governor Calvin Rampton as “Musical Ambassadors from Utah.”

In 1976 Gregg Hansen left Davis to take a position at the University of Utah. He was replaced by Dana Rothlisberger, who continued to build on the tradition by taking first at the 1976 and 1977 Davis Cups and performing at another MENC conference in Anaheim. Mr. Rothlisberger left in 1980 to pursue a doctorate and eventually went on to teach at the university level in New Jersey.

The band saw four directors in the 1980’s; Matt Breithaupt (1980-82), Mark Essenfeld (1982-83), Paul Kapp (1983-86), and John Yoon (1986-90). While the program evolved, the standard of excellence set by the bands from the 1970’s still fueled the program. Paul Kapp formed the first jazz band in 1984 and created the concept for “Moonlight Serenade,” the band’s annual dinner dance, during his tenure. Under John Yoon’s direction the band began to grow again, and for the first time in several years achieved superior ratings at festivals and became competitive again on the Utah marching band circuit.

In 1990 Steven R Hendricks took over the band program when John Yoon left to pursue a doctoral degree. Mr. Hendricks was the longest tenured band director thus far at 28 years. Since 1990 the band has become one of the most recognized groups at Davis High and has established itself as one of the finest programs in the country.  In 1998 the Wind Ensemble gave the most prestigious concert performance a school band can receive—a performance at the Midwest International Band and Orchestra Clinic in Chicago, Illinois to a standing room only audience of band directors and composers. The marching band has established itself as one of the finest in the country. This group has earned scores at regional competition that rank them among the top 25 nationally and has performed twice at the Pasadena Tournament of Roses Parade (2003 and 2013).

Davis High is one of only a few schools in Utah history to qualify three bands for the State Concert Band Festival (they have accomplished this three times), and in 2010 all three concert bands from Davis earned a superior rating at state. The band program is also home to one of the top winter guard programs in the state and their winter drumline has acquired multiple state championship titles.

On November 23, 2017, the marching band had the honor of representing Utah in the Macy's Thanksgiving Day Parade in New York City.

Today the Davis High Band sets a standard for excellence with their students. The band is always well represented in solo and ensemble festivals as well as region and state festivals. Since 1991 the band program has earned over 25 superior ratings at the State Concert Band Festival. The band has been named “Musical Ambassadors from Utah” by both Governor Leavitt and Governor Herbert. A special mention of the band was read on the U.S. Senate floor by Senator Michael Lee. In 2018 the band was asked to open the legislative sessions at the Capital building. Numerous band members have gone on to play in college on scholarships. Building on the tradition established by those who went before, the Davis High Band continues to be one of the truly exceptional organizations at Davis High School.
​Band Directors at Davis High School
Emily Sitzer 1919-20
Leander T. Thompson 1921-25
Apollo Hanson 1925-26
Hugh W. Dougall 1926-30
John L. (Jack) Stacey 1930-36
Floyd Fletcher 1936-38
Douglas Liston 1938-42
Parley Thorderson 1942-48
Hollis Grange 1948-1956
Frank Postma 1956-58
Ronald Pexton 1958-60
Frank Parker 1960-65
Jarvis Palmer 1965-66
Harold Gottfredson 1966-67
Frank Johnston 1967-68
Mr. Miller 1968-69
Gregg Hansen 1969-1976
Dana Rothlisberger 1976-1980
Matt Breithaupt 1980-82
Mark Essenfeld 1982-83
Paul Kapp 1983-86
John Yoon 1986-90
Steven Hendricks 1990-2018
Michael Crookston 2018-present